To better understand the concept of a Process Performance Model (PPM), it helps to have a little background about both Process Performance Baselines (PPBs) and PPMs. Both are based on the historical process data that the organization has been collected and analyzing. The CMMI definition of a PPB is a documented characterization of the actual results achieved by following a process, which is used as a benchmark for comparing actual process performance against expected process performance. In other words, the historical process data, when analyzed, will indicate how the process has behaved in the past and the expected range of the process performance. As an illustrative example consider hurricanes. Based on over 100 years of weather data, we know where hurricanes usually form and where they travel, either up the east coast of the US or into the Caribbean and Gulf of Mexico. 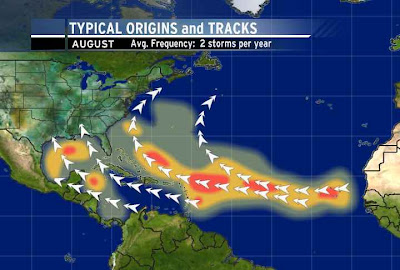 These data define an envelope that contains the expected range of data based on historical information. By statistically analyzing these data we can compute the central line and a set of control limits for the type of control chart that is appropriate for the data being analyzed: p chart, np chart, c chart, or u chart.

The CMMI definition of PPM is a description of the relationships among attributes of a process and its work products that are developed from historical process-performance data and calibrated using collected process and product measures from the project and that are used to predict results to be achieved by following a process. So by further analyzing the historical data, it is possible to derive PPMs that can be used to predict future process performance based on current process performance. The model may be as simple as merely extrapolating a straight line, or as sophisticated as running Monte Carlo simulations of the process if your model is based on a number of independent variables. Going back to the hurricane analogy there are a number of predictive hurricane models that the weather service uses to predict the ground track of the eye and where it might make landfall. Whereas the hurricane PPB is based on the statistics of ground track data from past hurricanes, the hurricane PPMs use that information plus additional parameters such as speed, barometric pressure, other nearby weather systems, high pressures, and fronts to predict the storm’s ground track. Every time there is a new set of storm data collected, the meteorologists revise their predictions by running the data through the PPMs. In addition, like the hurricane example, you may have more than one PPM because of the inherent complexity of the process you are trying to model. Sometimes the models agree fairly closely, as in the example shown. Other times there may be a big variance.

Controlled variables are also important to identify in experiments. They are the variables that are kept constant to prevent their influence on the effect of the independent variable on the dependent. Every experiment has a controlling variable, and it is necessary to not change it, or the results of the experiment won't be valid.

Therefore, a PPM is a predictive model based on one or more independent variables that can be used to predict an outcome (dependent variable). It is a mathematical model built using empirical process performance data.

In order to build a PPM, you have to use statistical and other analytic techniques to examine the historical data to construct a model that you can use to predict future states. Initially the PPM may not be very accurate. But each time you use a process you should incorporate the resulting process data into the model to improve its accuracy for its next use. A simple example is the estimation model used by the project manager. When first starting to use a project estimation model, the predicted results probably will not be very accurate. But collecting the project estimates and incorporating them into the model, the ability to predict accurately will improve over time.

Posted by Henry Schneider at 9:05 AM

very clearly elaborated. It would be great if we can see an example specific to software developement like how to predict rework - Ch.

The Process Performance Models are derived empirically from your historical performance data. Any model posted for predicting rework most likely would not apply to your specific situation.

You need to keep in mind that High Maturity is all about uncertainties, probabilities, predictions, and confidence levels - which are evaluated in terms of value to your business. You have to determine the strategic business goals for your organization and then define the Quality and Process Performance Objectives that support and trace to these objectives. Once you do this exercise, it will help you define your critical processes and measures. Then you will be able to understand if rework prediction is important to your or business objectives. You will also have to define what rework is. What kind of rework is critical to your organization? Is it repeated requirements reviews? Repeated design reviews? Multiple revisions to a document? Retests? etc.

You have to be specific about what your PPMs will model. Do a root cause analysis to determine the factors that you have control over that contribute to rework. Probably skill level, requirements volatility, complexity, etc. Once you have done this analysis you evaluate your historical data to determine what data measures you have collected over the year(s) that provide insight into these factors, and then you perform the necessary regression analysis to derive your PPMs.